The library and the reading room have been functioning from the very beginning of the institution. When the Mission was shifted to its own premises, the library and reading room were organized in the ground floor of the main building to which a wing was added in 1944.

The foundation stone of a new building (dispensary on the ground floor and first floor reading room/library) was laid by Sri Sankar Prasad, Chief Commissioner of Delhi, on May 1, 1949, the design again being done by Sri N.K.Kothari. This was opened by the then Hon’ble Health Minister Rajkumari Amrit Kaur on August 27, 1950. (This is the corner building on our campus, where still the homeopathy dispensary works out of. The Axis bank works out of part of the building.) With the eager reception received by the library from it’s users, the first floor library soon began to feel the shortage of space.

However, under the leadership of the then Secretary of Delhi Centre and later the 13th President of the Ramakrishna Math and Mission, Belur Math, Swami Ranganthanandaji, the present library with an area of 2772 sq. ft. on the ground floor and an auditorium with 1000 seats on the first floor were constructed. The foundation stone of the library and the lecture hall building was laid by Swami Nishreyasananda on the birthday of Sri Ramakrishna on March 6, 1954. 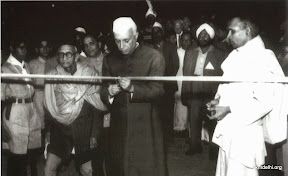 Constructed at a cost of Rs. 3,33,000, the new library building and auditorium were formally inaugurated by the then Prime Minister of India, Pt. Jawaharlal Nehru on November 23, 1956. Attended by two thousand persons, the meeting was addressed by him in Hindi. Describing Swami Vivekananda as a great leader who spread the message of peace, harmony and fellowship, he emphasised that the basic approach to human problems as envisioned by Swamiji was indispensable today, if the world was to be saved from disaster. He called upon the youth of India to study the soul-stirring messages of Swami Vivekananda who “shook the soul of India and moulded India’s mind and national thought.”

The library is open to members for the purpose of reading and reference work on all days except Mondays and other notified holidays. The library has a reading room facility and also a lending section for the benefit of borrowers, but books are issued to members residing in Delhi only. The library is equipped with books on generalities, philosophy and related disciplines, religion, social sciences, languages, pure sciences, technology (applied science), arts, literature, rhetoric, geography, history, etc. covering 13 languages, including French and Russian. The library provides dailies in English and Hindi and periodicals in several Indian languages.

We receive frequent requests from our members for A.C reading room. As per our constant endeavor for providing more and more facilities to our readers, we have decided to provide A.C. reading room facility to ‘select members’.